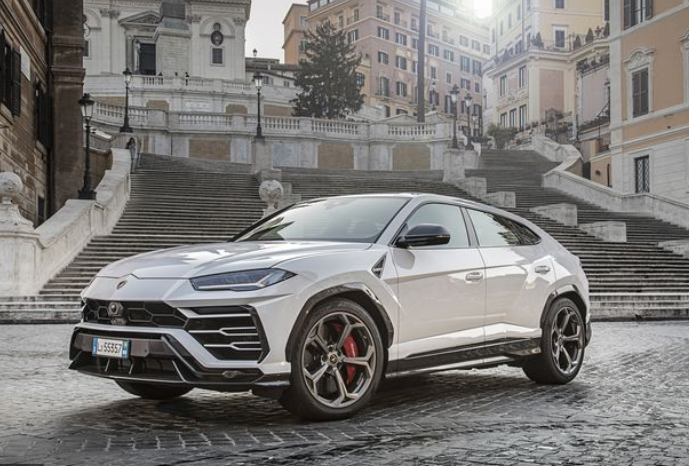 Lamborghini Urus review from our Dealership

It is no secret that Lamborghini belongs to the Volkswagen group and can therefore draw heavily on its organ bank. The Urus is therefore based on the same platform as the Audi Q8, Porsche Cayenne and Bentley Bentayga. It shares the same engine base with the Cayenne Turbo, namely a supercharged 4.0 V8. However, the supercar manufacturer had an obligation to do better than its little comrades, which is why it benefits from its most powerful version: 650 hp, which is 100 hp more than the Cayenne Turbo, excuse the pun.

In fact, the Urus could claim the status of the most powerful SUV on the planet if the Jeep Grand Cherokee Trackhawk didn't taunt it with its 707 hp. The Italian can also play in the limousine court with its 5.11 m long. A reality that its plastic skillfully conceals. The Aventador-inspired angular lines and the flowing roof give it a sporty look, amplified by the huge 21-inch minimum rims. Fans can even opt for 23-inch models. Despite its Germanic genes, the Urus hasn't lost the sense of spectacle and immoderation that characterizes a Lamborghini...

2019 Lamborghini Urus
To speak of prices when referring to such a brand would seem a bit vulgar. For customers who want to display themselves on board a Urus, paying full price is almost part of the game. They won't be disappointed since the base price is set at €205,715. However, it is almost a bargain against the Bentley Bentayga, which starts at €217,300, or the Rolls-Royce Cullinan, which easily passes the €260,000 mark.

The future owner of Urus will still have a chance of winning the contest for the highest price if he picks from the generous options catalogue. The choice of decorative inserts is vast, as is the choice of driving aids, including night vision (€2,521) and semi-autonomous driving with head-up display at €6,000. Finally, the French State will naturally levy the highest malus of €10,500 as well as the tax on prestige vehicles up to €8,000, not to mention the coquettish price of the car registration document for a model with 58 fiscal HP .

What city is closer our Lamborghini Dealership ?